Humans are using up the planet’s resources so quickly that people have used a year’s worth in just seven months, experts are warning.

And the rate at which we are consuming the Earth’s natural resources is still speeding up.

This year the annual date when people have caused a year’s worth of ecological damage – Earth Overshoot Day – comes two days earlier than last year.

It falls on August 1 as calculated by Global Footprint Network, an international research organisation that observes humanity’s use of materials such as food, timber and fibres, as well as carbon emissions from burning fossil fuels and the environmental damage caused by building infrastructure.

The experts say it means humanity is currently using nature 1.7 times faster than our planet’s ecosystems can regenerate.

The costs of the “ecological overspend” include biodiversity loss, deforestation, soil erosion, collapsing fisheries, fresh water scarcity and the buildup of carbon dioxide in the atmosphere, leading to a vicious circle of climate change and more severe droughts, wildfires and hurricanes.

Such effects are starting to force people to migrate to cities or countries, Global Footprint Network warns.

Mathis Wackernagel, head of the organisation, said: “Fires are raging in the western United States; on the other side of the world, residents in Cape Town have had to slash water consumption in half since 2015. These are consequences of busting the ecological budget of our one and only planet. 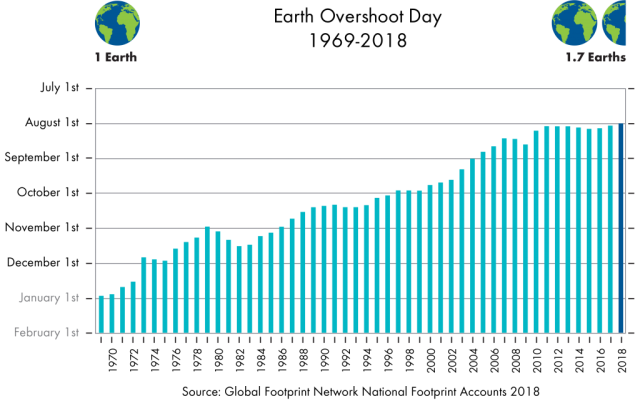 “Our economies are running a Ponzi scheme with our planet. We are using the Earth’s future resources to operate in the present and digging ourselves deeper into ecological debt.

“It’s time to end this ecological Ponzi scheme and leverage our creativity and ingenuity to create a prosperous future free of fossil fuels and planetary destruction.”

The group’s solutions to address the crises include:

Scientific studies over the past year have revealed a third of land is now acutely degraded, while increasingly erratic weather and habitat loss are accelerating the decline of wildlife.

Network activists are inviting people to calculate their own personal Overshoot Day and ecological footprint at www.footprintcalculator.org.

They say one cause for hope is that the ecological footprint of China, the country with the largest total impact on the planet, fell by 0.3 per cent from 2013 to 2014 after a steady climb since 2000.