Over the weekends, we took a 30 mins ferry ride to Bintan, where we are greeted by friendly resort guide, drove us to Bintan Mangrove as our first stop tourist destination.

Lagoi Bay Village Resort is part of the Bintan Resorts project, occupies and refers to the entire northern coast of the Indonesian Island of Bintan, the largest of the enchanting Riau Islands in the South China Sea. This 18,000 hectares development is masterplanned and managed by PT Bintan Resorts Cakrawala and its associates. The area is home to award-winning resorts, designer golf courses, and popular recreational facilities and attractions.

DID YOU KNOW? “MANGROVES MAY VANISH FROM THE SURFACE OF THE EARTH IN 100 YEARS’ TIME.”

There are about 70 mangrove species in the world today, some of which are critically endangered. With the continuing threat from the rise in sea levels and coastal developments, mangroves may vanish totally in 100 years.

Experts estimate that on a global basis, these tidal wetland ecosystems provide at least US$1.6 billion (S$2.2 billion) worth of services each year, such as protecting the coastline from erosion, improving water quality, and providing habitats for commercial fish species. The one and a half hour eco tour takes you on a back-to-nature encounter with Bintan island’s rich mangrove forests. As you journey through the quiet waterways of Sebung River, you’d enjoy the sights and serenity around you. Observe the myriad plant and animal life forms that flourish alongside the fleshy green mangrove leaves.

Wildlife The river plays host to a variety of exotic wildlife. Some of the shy wildlife includes the macaque and silver leaf monkeys, monitor lizards and snakes. You’ll hear the calls of the kingfisher and purple heron, and perhaps see a kingfisher in action as it swoops to the water to snare a fish. The riverbed teems with marine life including coral fish, mudskippers, crabs, prawns, mud lobsters, snails, clams and a variety of small fish.

Indigenous folks Traditional life is still very much alive among Bintan’s mangrove forests, and you could say that the homes, boats, fishing traps and daily meals are largely derived from the mangroves. In fact, over 47,000 tonnes of fish are caught in Indonesia’s mangroves every year, and just one hectare of mangroves can yield over 160 kilogrammes of shrimp. On your discovery tour, when the river meanders south, you’ll catch a glimpse of the orang laut (sea gypsies) and kelongs (over-the-water fishing houses built on stilts) of the river folk. Also look out for the traditional charcoal kiln, and static fishing traps (bubus) that fishermen use.

There is also the option of Premium Mangrove Tour, an exclusive and private tour along the Sebung River to enjoy the natural scenery of the mangrove forest. You will get to bring home a Bintan Resorts souvenir and certificate as proof of participation in mangrove conservation.

*All tours are subject to weather and tidal conditions as well as operational considerations. Tour reservations can be made directly at the activity desk of all Bintan Resorts hotels.

On 2nd day of our tour itinerary, after eating our buffet breakfast, went to play the ATV vehicle. An all-terrain vehicle (ATV), also known as a quad, quad bike, three-wheeler, four-wheeler, or quadricycle as defined by the American National Standards Institute (ANSI) is a vehicle that travels on low-pressure tires, with a seat that is straddled by the operator, along with handlebars for steering control.

Thereafter, our personal driver drove us to Agro beach resort, where we went for our lunch and dives there. Played some sea sports as well. There is also a mini pet farm there at Agro beach resort. Proceed and headed over to the 500 Lohan Temple, where a surreal setting that could very well be in Mainland China greets you. There are over 500 life-sized, (Lohan) statues – each one human-like, unique and different from the next. You may come across familiar faces here such as Tripitaka and Guan Gong. 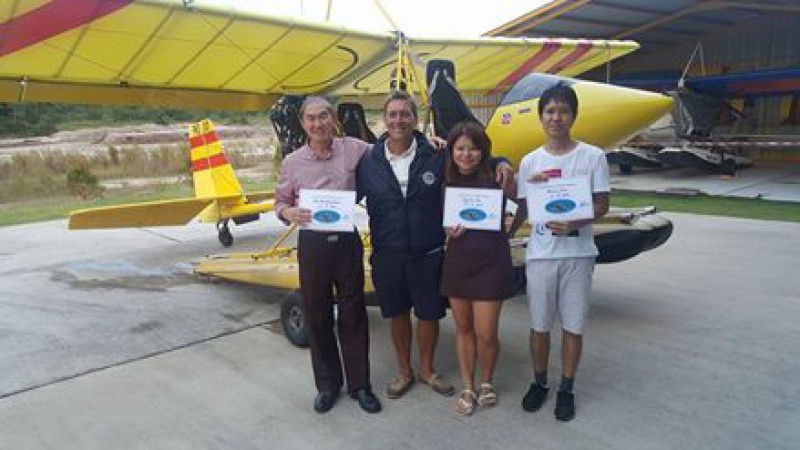 In the late evening, we also went to Air Adventures Flying Club at Lagoi Bay. Has been my utmost honour to fly with Instructor # A66820 - Struart Perkins, of more than 24 years of commercial and private flight experience under his belt. It was a memorable flight of Lagoi Bay Bintan, Indonesia with breaktaking sight of the entire topography of land & sea view of Bintan.

On our last day tour at Bintan, after our buffet breakfast, cycled from the resort to the magnificent lake there to take some photos and also went fishing. But we didnt really do any fishing there as its only for a short session. Ordered a plate of satay to eat, some drinks as well and also went back to beach area to try some local food delicacies before we had to rush for our ferry back to Singapore.