My first trip to Australia was to Melbourne at year 2010.

Other than being a very beautiful country with lots of scenic attractions, Australia is one of the wealthiest and developed country in the world.

I Love Australia ! A country that has given me many beautiful memories. :)

The Great Ocean Road is an Australian National Heritage listed 243 kilometres stretch of road along the south-eastern coast of Australia between the Victorian cities of Torquay and Allansford.

Tourists are willing to wait till sunsets to see the tiny, little penguins as they wobble towards the seas. Aren't those penguins cute?

Phillip Island is an Australian island about 140 km south-southeast of Melbourne, Victoria. Named after Arthur Phillip, the first Governor of New South Wales, Phillip Island forms a natural breakwater for the shallow waters of Western Port. 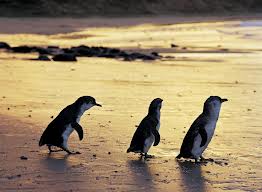 Melbourne’s Royal Exhibition Building is one of the world's oldest remaining exhibition pavilions, originally built for the Great Exhibition of 1880. It housed the first Commonwealth Parliament from 1901, and was the first building in Australia to achieve a World Heritage listing.